The Myth of Panic

While my thesis isn't complete (it's just really getting started), I have completed all my course work for a graduate degree in Sociology, so I hope you can grant me the leeway of calling myself a sociologist.   I spent an entire semester studying the sociology of disaster and as we've settled into the COVID way of life, I wish to give some sociological framework to our current state of disaster.

First, let me begin with disaster framework.  Disasters and myths are closely intertwined. One of the biggest myths when it comes to disasters is the myth of panic.  This myth is believed by public officials and perhaps by even the public generally. The myth is: when a disaster is approaching people will panic.  Once people panic, they will take irrational and unsafe steps and must be protected from themselves by giving them as little information as possible.

Overwhelmingly, in disaster research and accompanying sociological studies, not only do people not panic--they don't respond at all.
Studies show that the initial reaction of the majority of the public in the face of disaster is "disbelief, denial and reinterpretation to reduce or eliminate the threat potential" (Drabek 2013:70). Like the woman asking the police officer what theater he's playing at, people have creative ways of trying to make sense of what is happening so that they do not have to believe that they are experiencing a disaster.

But people *do* panic at times, right?

The short answer is Yes. And No.  People will panic, but studies show that it takes a long time and is preceded by relatively calm, reasonable responses once there's an understanding that a disaster is taking place.  Renown disaster research, Henry Quarantelli, gives a three step process that leads to panic.
Step 1: Individuals must have a perception of possible entrapment.
Step 2: Individuals must sense powerlessness; there is nothing they can do to escape.
Step 3: Individuals must have a feeling of social isolation of sole dependency upon themselves in a crisis.
Any disaster can have one or more of these aspects, but only people who are experiencing all three panic.
Someone who jumps from a top floor of a hotel in a fire is a perfect example. This person feels trapped, powerless, and they can only depend on themselves.  Only then do they panic and jump.

The key to correct responding to a disaster is working to overcome disbelief. What overcomes disbelief? Consistent correct information.
Before Hurricane Katrina hit, there were many people who believed that New Orleans levees could not take the pounding and hold.  But this information was not widely circulated. In fact, the city was so caviler about the whole thing, that they day before it hit, the busses are still driving around on the regular routines.  All of those with the financial means to leave and a place to stay, left.  But instead of bussing the families of low-income neighborhoods--in the most risk for destruction--the busses were still just driving around as if everything was normal. There wasn't consistent correct information.
In the Teton Dam disaster, which I studied at length, several days before the dam broke leaders knew they were in trouble.  The dam was made of earth and parts were caving in.  For days.  If they had overcome their own disbelief and evacuated the area beneath the dam, there would have been no fatalities. But they persisted in their disbelief.  The dam couldn't actually break, could it? One radio station had heard there were problems at the dam and the owner left his son in charge and drove over to look at the dam. When he got there, he was appalled at what he saw. He radioed (with a CB radio) his son and demanded to be put on the radio.  He began describing what he saw.  He ended up reporting the entire dam collapse giving families who were listening to his station precious time to pack up and get to higher ground. But there were two radio stations servicing the area. Those on the other station or those who checked the other station remained in disbelief.  If this was this big, wouldn't both stations be reporting it? For those who remained in disbelief, their warning became a knock on the door from someone at the sheriff's department telling them they had 5-10 minutes to escape. 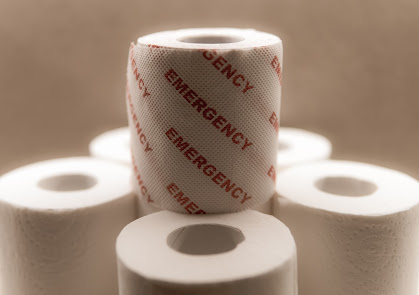 A friend of a friend challenged me on the myth of panic by asserting, "Do you not remember the great toilet paper scare?" The empty grocery store shelves are not evidence of panic. It's evidence of preparation.  When people believe that a disaster is imminent, they want to take action.  It they do not have a clear consistent message about how to prepare, they will do something.
If we apply this to COVID-19, we see (as we do in many disasters) a lack of leadership.  Evidence shows that leaders knew this was deadly, but publicly downplayed the seriousness.  This was supposed to help people not panic.  But people aren't stupid.  By the time President Trump is explaining the COVID-19 will  eventually just "go away," we were slammed with news stories from China on people being locked in their apartments for 50+ days.  So the people took action.  If I have to be locked in my house for 50+ days, what do I need? What would I most not like to run out of? Thus, the run on toilet paper. But this isn't evidence of a panic; it's evidence of action.  This is pretty clear-headed decision making given the information people had.
In countries like Taiwan, where the people understood the importance of masks and they received very clear with instructions of what do, they weren't having runs on stores.  Clear concise information is the antidote. But you must--MUST--trust the people.
Posted by Jenna Wood at 11:00 AM