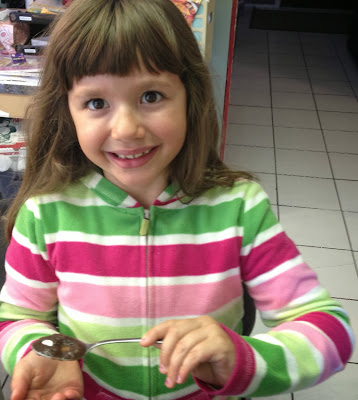 Annika's vision has slipped a bit.  She's fighting fluid under her retinas.  Nate, on the other hand, has never been better.  So I really believe it's just a matter of finding the right dose.  She was barely 5 when she was given meds for the first time.  She's growing and her meds have to grow with her.

Two months after increasing Annika's meds by 50%, her left eye is doing better, but her right eye is still getting worse.  So we've increased her meds by another half a pill.  In a few more weeks we'll see if this saves her eye or if we have to go up again.

In good news, Annika in a champion pill taker.  That girl can down 2 pills in one swallow--no problem.  And she's 7! She takes them in applesauce.

Two months ago Emma's eyes were slightly worse.  We bought her a pill box and with her pill taking getting much more consistent her eyes are doing great.

And Nate. Can you believe that only a little while ago we were so worried?  Now he's doing awesome.  He sees 20/20 in his good eye.  I honestly never believed that would happen.

****
Since learning about our kids eye condition more that 3.5 years ago, Beck has been praying for his affected siblings.  At 5, he's been praying for them since he could pray.  He prays for them in every prayer. Every. Single. Prayer. Because we were worried about Nathan for so long, Beck always prayed for Nate first.

"Please bless Nathan's eyes," he prays.  And then almost as an after thought he adds, "And Emma's and Annika's."

But this last month with bad news for my little girl twice in a row, I know I need Beck's prayers on her behalf.  So we talked about rearranging the order--praying for Annika first.

I honestly believe that God listens carefully to small children's prayers.  And I believe that Annika will get better.
Posted by Jenna Wood at 10:01 PM

Such beautiful, sweet children you've been blessed with. I think the prayers of small children must have some sort of priority :)
xo