Most businesses I know have policies.  Sometimes they have policies around policies in a Pharisee/Sadducee kinda way.  As I'm working up policies for Facebook contests--official rules we'll call them, I realize that I have several policies myself even if I don't share them.

The more I've thought about it, the more I realize that it's OK to have policies and you don't have to make any kind of excuse for having them.

So, without further adieu, here are my personal Facebook policies.

1. I don't play games.  Look, in my life I hardly have time to get the dishes and laundry done.  I have to pay someone to clean my bathrooms and mop my floor.  I definitely don't have time to play games.  I will also admit that in college and early in my marriage I played a fair amount of games on the computer.  I found them to be highly addictive and monumental waste of time. 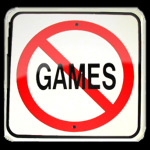 2. I don't vote for contests.  Period.  One summer, a few years ago, we ponied up the money to go to Disneyland.  It was one of the worst years of my life.  I was beyond depressed, but I went to the happiest place on earth and survived.  I had expected our income to increase in the summer, as it usually does, due to more people buying cars then.  It didn't happen.  Our industry, the auto industry, was one of first and earliest hit by what was later called, The Great Recession.

That summer, after our return from Disneyland, not one, but two of my Facebook friends had entered a contest to get a free trip to Disneyland.  I voted for neither.  They both won the trip.  Here I was with a giant heartache, a hole in my wallet and now struggling financially, and I had paid for my trip.  I figured everyone could do the same.

I have made one notable exception by voting repeatedly for my child's school to win a grant.  We didn't win, but the effort garnered enough publicity to help us win a $100,000 from Target--some three times the amount of the grant we were going for.

3. I block kids.  If you're a kid under 15 on Facebook, I reserve the right to block you from seeing my posts.  I may be your aunt, but I'm not giving you material to tease my kids with.

So what social media policies do you have?
Posted by Jenna Wood at 10:00 AM