Wendell lost his church keys.  This is like losing the keys to work.  They are big, clunky and expensive.  I was told once that it cost over a hundred dollars to replace them.

Wendell had been looking for several weeks for the keys.  He had to schedule Elder's quorum presidency meetings only when he was sure someone else would be in the building.  To say that it was a hassle was somewhat of an understatement.

So Monday night, I was in charge of the Family Home Evening lesson.  I read a little story from the Friend, about finding lost things.  I directed my family to their knees and we prayed to find the lost keys.

I have to admit that about the time we settled into the lesson, I felt a sense of panic.  After all, what if this doesn't work?  What if God doesn't answer this prayer the way we, collectively, wanted it to be answered?  Even as my mind became flooded with doubts and concerns, I felt a sense of peace that if that were the case, I would be given the lesson to help guide my children.

During our brainstorming session each person shared where we thought the keys might be.  Anson thought behind the couch.  Emma thought in Dad's car.  Annika thought we should try the key rack.

Some of the ideas (like the key rack) were met with a bit of pessimism. Every now and then Wendell would say, "You have no idea how many times I've check there."

I offered that it couldn't hurt to check again.  Then the search began in earnest.  Anson and Nathan were moving the couch, Wendell went out to the garage, then came in and began looking on the key rack.  We'd only been searching for a few minutes when Wendell said, "Jenna."

I came into the kitchen where Wendell was standing by the key rack dangling his keys.  From "Amen" to finding the keys was about 5 minutes.  I was blown away.  Anson asked, "Did you plan this?" 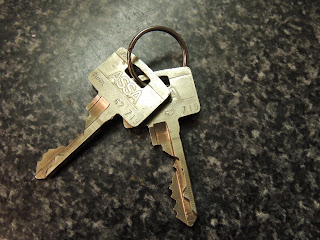 "No," I chuckled, "we did not plan this.  Dad has not been able to get into the church, we've asked the bishop twice about replacing the keys."

Wendell piped up, "I've spent 3-4 hours over the last couple of weeks looking for these.  No.  We did not plan it."

As it turned out, I had put a fancy-ish bracelet-style watch on the key rack, to remind us to replace the battery.  My watch had surrounded the keys, so each time the watch was moved to look for the keys, the keys moved with the watch.

I have no idea how many times Wendell had looked there, but I had looked through that key rack 3-5 times in the last week or so.  Yet after the prayer, there they were.

I don't know that this FHE made a huge impact on the kids, but it certainly made an impression on Wendell and me.  God is in the details.  He cares about the little things.  And he blesses people who act in faith.
Posted by Jenna Wood at 10:10 PM