Why I Look Like a Lop-sided Chipmunk Part I

The day finally came.  The procedure I've been putting off for two years now came due.  So, on Thursday, I went to the dentist's office and four hours later (four-freaking-hours!) I left the office with five new gum-grafts. (Apparently, this is what I get for being a woman, having children, breast-feeding and being related to two other gum graft recipients--my dad and little sister--neither of whom has ever been pregnant or breast-fed anyone.)

This is not my first gum graft.  I had that pleasure about three years ago, I think.  And I remember thinking, "I will do ANYTHING to not go through that again."  Knowing full well that we had only tackled the worst cases and that my gums were still receding.

(Going against my better judgement, I am now going to reveal the history of my dental hygiene.)  You see, I've always been a good brusher.  Even too good of a brusher (another reason for receding gums), but I was a below average flosser.  Oh, I'd go to the dentist and get a little reminder that I should floss everyday.  And I would.  For a few weeks.  Maybe even a couple months, but that's really the outside edge.  Then, I'd quit flossing, except, of course, when something obvious was in my teeth, like meat or popcorn.  Therefore, I was still flossing at least once a week-ish.

Then I'd get that little card in the mail that says, "It's time to go to the dentist again..."  And I'd think, "Oh, pooh, I haven't been flossing."  So, I'd floss like crazy that last month.  Then the cycle would repeat.

But after that first gum graft...  There is NOTHING like pain to motivate a person.  Nothing.  And I floss every single day twice a day.  It may be flossing overkill, but it's how I roll now.  And it helped.  When I got the first gum grafts the dentist thought I'd have a year, tops before I'd have to come in for more.  One year became two and then three and I'd reached the outside edge.  And it became time. 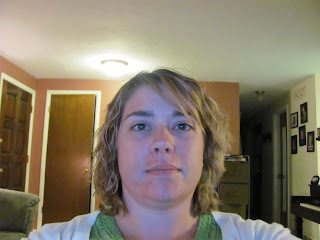 And I have no make-up on. Because it hurts that much to touch my face.
Posted by Jenna Wood at 10:23 PM

I am so very sorry. That sounds awful!!! I hope you never have to go through that again. You are still the Beautiful Jenna I have always known.