Carpet Cleaner Coming Leads to a Quick Clean Up

It is a known fact that I stink as a homemaker. I'm a reasonably good mother, but no risk of getting Mother of The Year. I'm good with academics. That's really my strong suit. But I'm terrible at the clean-house-lovely-decorations-feng-shui kinda thing. Terrible. That's why this was such a big freakin' deal.
Once I had accomplished that not-so-small feat. I decided to call the carpet cleaner.
There was a time when I was as regular with having the carpet cleaner as I
was at the dentist. And I'm perfect with dentist appointments. Every six months, like clock work. But having the last two babies back to back, I just started thinking, why? Why should I have the carpet cleaner come when some baby is going to urp on the carpet tomorrow? So I waited until the urping was done. Plus a year. Then I cleaned up and called the carpet cleaners.
Now, in the week between when I called and when the cleaners could actually come, um, the basement wasn't quite so tidy. And, um, the upstairs which hadn't been thoroughly tidied in quite a while was, um, still in need of tidying.
So at 8:00AM, the morning of the carpet cleaning, Wendell and I flew into a frenzy trying to clean up. We were the first appointment of the day and the cleaners were coming at 9:00. At 8:50 Wendell and I were in a sweat. The basement family room was mostly devoid of furniture, but still littered with small toys and crumbs and garbage. And the upstairs living room had barely been touched.
At 9:10 we were going strong, grateful the cleaners were late. I may or may not have been praying that they would break down and be really, really late. And Wendell may or may not have been cursing me for setting the freakin' appointment at 9-freaking-AM.
At 9:15 the cleaners called and said they'd be late. I was having a forced pit stop to change a poopy diaper. If I'd been on the phone, I would have told them not to hurry and I was glad they were late. But Wendell got the phone and just said things like, "Yeah. OK." and stuff.
At 9:25 Wendell headed out the door to take Annika to pre-school. I was now alone to do all remaining cleaning. Suddenly Wendell popped back in. "They're here," he said. And took off with Annika. Real panic set in now. I started scooping up armfuls of papers, piano books, and cub scout manuals from the Bermuda Triangle portion of our living room, and sprinting to my bedroom to dump the things on my bed, which wasn't made.
At 9:30 the first carpet cleaner entered my home, saw my disheveled living room and me in my drenched sweats and said, all casual-like, "Hi. So....are you ready for us?" I paused, panting, and grinned. "Yeah. But I need you to start downstairs." As he brought in his cleaning materials, the sprinting to the bedroom continued.
Wendell returned from the pre-school drop and helped me finish cleaning up, just in time for carpet cleaner guy #2 to arrive. All of the necessary dumps had been made and I was frantically vacuuming with my Dyson as he stood with his trusty old fangled vacuum that vacuums 10 bazillion times better than my Dyson, and saying with a rural Utah drawl (if there is such a thing), "I can vacuum this. You can stop now."
So I turned the carpets over to him and went and did the dishes (both sinks were full) and wiped the counters which were still showing the remains of breakfast. And I cleaned for another hour, solid.
When they left, I collapsed. But not on my bed, because it was full of stuff. And I ignored my bed-full-of-stuff until bedtime, at which point, I could no longer ignore it. So at 11:00-ish PM Wendell and I walked into our room to see how long it would take to clear our bed, which looked like this. 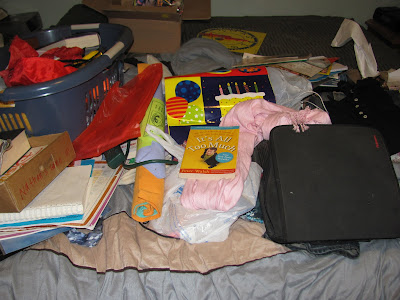 And I started laughing. "What's so funny?" Wendell wondered. Between giggles, I pointed at the book. 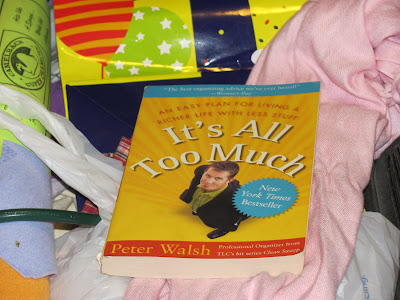 Yep. It's All Too Much by Peter Walsh, the organizing book that instructs you to throw away all your junk. Ah. The irony of it all.

I loved your "bermuda triangle comment." Our bermuda triangle is our office, where everything goes to die. It's terrible. A close second is the catch-all also know as my kitchen counter.

I am jealous of your clean carpets. I'm still waiting for a breaking between the urping and potty training.

I must say that one think living in Germany has forced me to do is live with less. We just (as you know!) don't have space for ANYTHING! Great story!