Beck is 15 months today...or was it yesterday? It's so hard to decide when your child's B-day is the 29th and there is no 29th of the month. (Weird side note... On the 26th of Feb I had to check Nathan out of school for a dentist appt that really deserves it's own post. But when I got to school the last half dozen or so parents had all written the date as Feb 29. This is especially weird since there is NO 29th until 2012!!!) 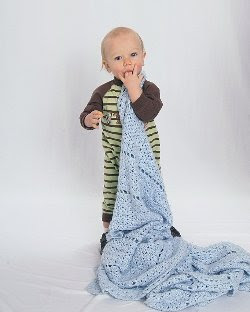 1. Beck jumps on his bed. He's been doing this since he was 8-9 months old. It's awesome and hilarious. 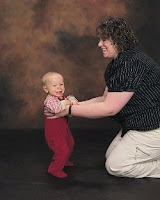 2. Noises. Everything right now goes "vrrrooom" or "zzzoooom". And by everything I mean spoons, rubber ducks and orange cylinder blocks. Everything.

3. More noises. He also blows bubbles, raspberries and sticks his tongue in and out going "lad-el, lad-el".

4. He mews like a cat. It's high pitched and hard to hear, but it sounds just like Sneeze.

5. He throws books down the stairs. Wendell doesn't think it cute, but I think it's hilarious.

6. He LOVES garbage. He empties the recycle bin onto the kitchen floor several times a day.

8. He's named his blanket Bob. I think he was aiming for "baba" but it kept getting cut short to Bob and that's what we all call it now.

9. He says the names of most member of our family. Anson and Nathan he says best while shouting. At 12 months he could say Anson extraordinarily well. He'll also wander the house calling sweetly for "Aaaaa-ka." (Annika)

11. He love playing the piano both a little one my mom bought for Annika and the real one. Although, he's mostly only drawn to the real piano during practice time.

12. He dances. At the little plastic piano, he'll put on a song then hold on to the piano and bounce his knees up and down. So freakin' cute!!! 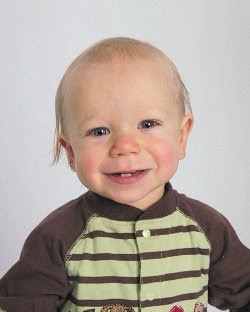 13. Hanging upside down is second only to hide and seek. Since he was 10 months or so we'd say, "Ready, set, GO!" He'll let out a giggle and flop backwards until he's upside down suspended only by his legs.

14. Bouncing on the bed. You could probably turn me into child services for this, but when Beck was about 4 months old, I dropped him on the bed from a short distance and got HUGE smiles. Soon he was giggling and he had an amazing way of keeping himself very compact. Now it's tons of fun. We drop him on the couch at church, the couch at home and on the bed.

15. Flips. He love to be flipped on the bed and off of laps, where he lands on his feet.

Ya-hoo! I did it 15 funny things about Beck. Tomorrow I'll try to find ya some pics of the little guy. For the record, these are Beck's 1 year pics which were taken Jan 26th. Afterward we cut his hair. Now he looks like a little man.
Posted by Jenna Wood at 11:41 PM

I have to say my favorite is the middle finger sucking he does. This is a great list. He is very cute.