Now that Anson's eight, he's a cub scout. In fact, he's the newest cub scout in our ward. So we had our introduction to the pinewood derby. Seeing as I have no brothers, it was also my introduction. Wendell (and Anson) obsessively worked on the car almost everyday for a week and a half. But it must have been worth it--Anson won! 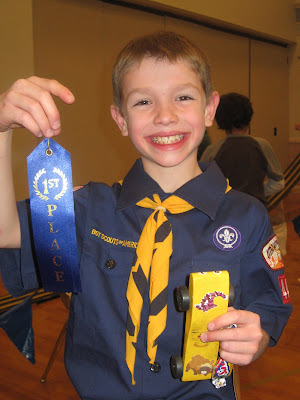 He was so cute kneeling down at the end of the track shouting, "GO! GO! GO!" as his car won all three matches.
The leaders also gave out a special award to each boy based on the design of the car. Anson's award was "Wood Chewer." Honestly, he was just as excited to win that one, although, he is a competitive soul. 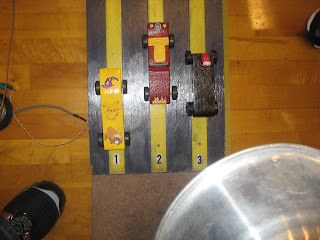 Meanwhile, I've been occupied potty training Annika. She has only had one #1 accident in 9 days of potty training. Thanks in large part to months of "practicing" with pull-ups. If only we could get #2 in the potty from start to finish.
Yesterday I spent about 1 solid hour cleaning up poop from a catastrophic accident. I'll spare you the details, but I was out of patience and my hands were bleeding from washing them so many time when I was done. Bleh.
Posted by Jenna Wood at 8:35 PM

Great job Anson! You're a cutie!

Potty Training? Oh yeah, I forgot about that. I'll be there all over again. Why didn't you remind me? LOL