About a month ago, shortly after our return from Seattle, Beck had his 9 month appointment. I can't remember what they measured him, but they told me he was in the 70% for his height. I don't believe that for a second. I saw where the nurse measured him and it was a very generous spot. He's tops 60% for his height, but more likely 50%.
His weight was 16.1 lbs which means he's pretty much maintaining the 1% for his weight. To be honest, I was ecstatic about how much he had gained. I was told to start feeding him whole milk because he won't take formula and he needs a lot more calories than he's getting.
But I think he looks healthy, don't you? 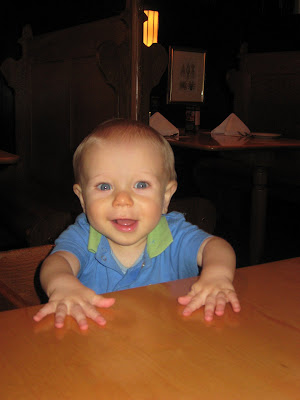 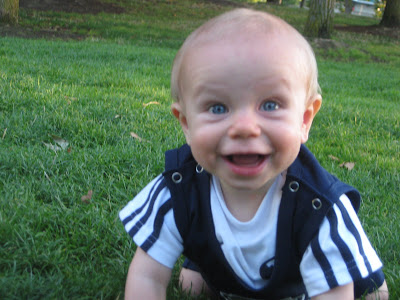 Regardless of the numbers- He is ADORABLE!!

What a little love...I think he looks perfectly kissable!

He is growing up so fast! I think he looks totally healthy. You should talk to Rachel about this - she's gone through exactly the same thing with her pediatrician. My children, on the other hand, are giants. He looks great - he's adorable!

Holy crap your kids are cute. He looks perfectly fine to me.

(slap some glasses on that little face, and you have a tiny Nathan.)

Who cares what the numbers say? I took in my 9 mo old last week also and he weighs 19.5 lbs which is only the 25th percentile...

He looks GREAT! I've had kids as low as -10% (yes, negative), we just call them our "travel-size" kids. (Just getting around to reading blogs after our no-media month!)