It was really lovely. Wendell and the kids brought me breakfast in bed. We had dinner at my parents' house and a small party. I got clothes from my mom, king size pillows and an iTunes gift certificate from my sisters, and head phones, a cool apron and a Josh Groban DVD from Wendell.
Saturday: All Heck Breaks Loose

I spent between 1:00 and 6:00 in the morning losing my birthday dinner. When Beck finally woke up around 8:00 I was too weak to change his diaper. He'd blown his diap out so Wendell had to strip him down to a fresh diaper. As I fed him, I realized he had spots. Lots of spots. They were everywhere, from the top of his head under his hair, to the tops of his feet. 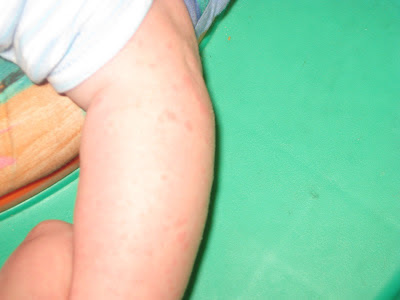 Wendell ran Beck to the doctor and my sister Christy came over and watched the kids while I slept. Turns out, Beck is allergic to all penicillin based antibiotics. Cool, huh? 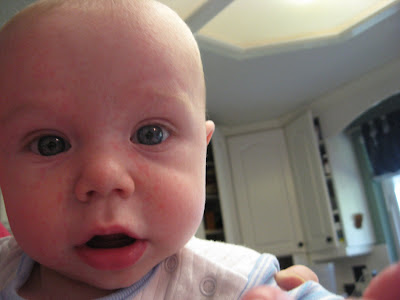 Spent the day playing hooky from church. Went to a BBQ at Tyler and Missy's house.


I chopped my hair. I asked for a bob with layers and swooping bangs. This is what I got. 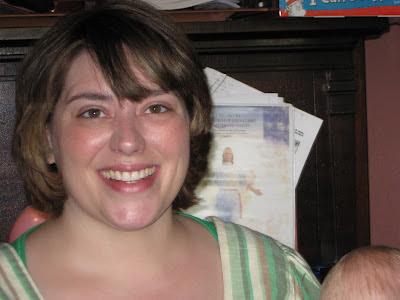 Tuesday: Cheered on David A.

Watched A.I. We cheered on our 17-year-old home boy. Thought he might actually have a chance at winning.

Nathan had the opening part at the kindergarten program. It was the longest, hardest part and exactly the same part Anson had last year. Because of Nathan's frequent outbursts in class, I was surprised he got a part let alone the most difficult one. We dressed him in a suit and he got a haircut on Monday, too. He marched right up to the microphone and said, "Thank you for coming to our Kindergarten program. Please stand with us and say the Pledge of Allegiance and the Star Spangled Banner." Then he hopped back onto his spot on the risers. Everyone stood, but didn't know what to do. Nathan had this "Ah-ha" look cross his face and he jumped down, marched up to the mic and said, "Ready, begin."

That was virtually the end of his good behavior. The boy next to him, pretend to throttle Nathan. He must have thought that was funny because he spent almost the entire program pretending to throttle the boy next to him. Although he did take an interlude to pull the hair of the girl in front of him. I was going nuts in the audience, periodically snapping my fingers, trying to get his attention without ruining the program.

During the song, "I Am A Pizza," Nathan decided to start licking and pretending to eat the boy he'd spent most of the night throttling. I'd had it. I sneaked up on the stage behind the curtains and started whispering his name. I waved my finger in a NO-NO motion and snapped my fingers a few times until all the bad behavior stopped. Sheesh.

Came home and watched the TIVO'd A.I. Felt bummed that David A. lost. Probably would have voted for David C. if David A. wasn't an LDS kid from Utah.

Life returned to normal. Emma did say something funny, though. As she surveyed my cork board looking for a place to post her spelling words she said, "Mom! There is not an extraneous pin up here!"

Annika also said a prayer on her own. It goes like this, "Heavenly Father, thankful for this food. Bless it to me moo me to our bodies. In the name of Christ, AAAAAA-Men!"
Posted by Jenna Wood at 9:54 AM

Jenna! I'm sorry you & Beck got sick. At least everything was okay with his allergy, it could have been a lot worse! Get better soon, and then lets play!

Gosh...sounds like you got really sick--and ON YOUR BIRTHDAY!! That is the worst!

And your poor baby boy having an allergic reaction to his meds....

Cute about your Kindergartner & his 15 minutes of fame! :)

You have had a very ADVENTUROUS past few days....I hope this next week will be lots easier for you and your family & much more relaxing :)

I love, love your new hair! Way cute!! I am allergic to lots of antibiotics, luckily there are many to choose from! Glad the babe is ok.

Our Neck of the Wood's said...

At least Nathan (mine) isn't the only one allergic to penicillin. It's really only a bad thing when they need an antibiotic, especially for the kids because the favorite kid ones are related. I hope he's not allergic to any others . . .

Paula! I had no idea Nathan was allergic to penicillin based antibiotics! Wow. Learn something new everyday.

Jenna! I was laughing so hard reading about the Kindergarten Program! I love it!
I'm sorry to hear you got sick. That is never fun and as a mom, you never get to call in sick.
I love your hair! You look fabulous!