What Do You Call Them And Do You Have One? 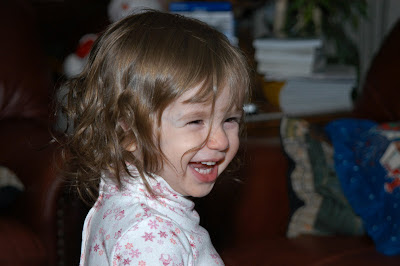 Annika has a fascination with belly buttons. She loves hers. She loves other people's buttons. She wants to see them. When, per chance, she catches a glimpse of someone's she giggles and says in a husky voice, "Ho, ho. I see ____________'s belly butt."
That's right. It's not a belly button, it's a belly butt. This started when she was about 16 months and she couldn't say button. But it's stuck and we all have belly butt's now.
Annika's second fascination is about tails. When I had Beck and my mom was watching Annika all the time they would play a little game. I guess you'd call it, "Does ____________ have a tail?"
My mom would begin with, "Does Annika have a tail?" This was followed by obligatory looking. When Annika had verified the facts she would say, "NOOOOOOOOO." She does this in a voice so husky it's almost guttural. We have to go around the whole family making sure that Mom, Dad, Emma, Anson, Nathan and Beck are all tail free.
She loves this game so much she often starts it. She'll say, "Does Beck have tail?" Which requires me repeating, "Does Beck have a tail?" Then she can answer, "NOOOO," with a lot of head shaking and complete amusement at the ridiculousness of the thought.
Wendell and I try to throw her off and we'll mention, "Does Sneeze* have a tail?" She doesn't even miss a beat, "YEA!" she squeaks out. 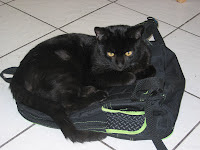 The cat comment made me chuckle. Our cat, Mossimo, and I have the same relationship. Sometimes I wonder why in the world he lives in this house.. and I'm sure in those moments he thinks the same of me!

That is so funny because my husband actually does have a Belly Butt. A few years ago he had to have emergency surgery for a ruptured appendix and so now he has a huge scar down the middle of his abdomen creating what looks like a butt. So Funny!

Cute, cute little girl. and Cracking up about your kid with the glasses. Hopefully we'll all have perfect eyes in heaven-