This may seem like a strange thing to do and it does come with a story. But first the giveaway! I am giving away a brand new copy (no I haven't read it) of the April 2008 O Magazine. To enter, leave a comment between now and Sunday. On Monday I'll announce the winner. 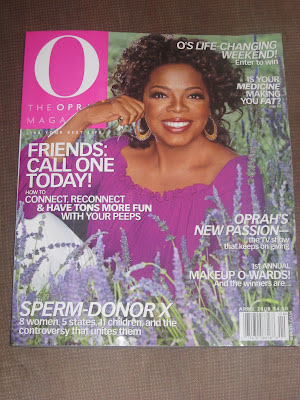 Here's the story. I picked up a copy of the February O Magazine just for fun and thoroughly enjoy it. I must have raved about it to Wendell, 'cause a few days later he called me from work and told me to check my email. I found an email from Wendell that said, "I hope you have a good day. I love you." And below was a subscription order for 2 years of O magazine. (Isn't he thoughtful?)
I was so excited, but I knew it wouldn't come for several weeks, so I planned on picking up at least the March issue, which was all about money and I really wanted to read that. (It's my private obsession to read about what to do with money.) On March 7th, I had my evening to myself. I went and got a pedicure (Annika, who's 23 months, calls them, "Mama's silly purple toes." Cute, huh?) and then went to pick up the March O Magazine.
Perhaps you're already ahead of me here, but the March issues were no longer on newsstands, April was out. (Why do they call it the March magazine if it comes out in Feb?) I went to a couple of different stores and the library looking for a March copy. Meanwhile, since April was out, I bought it because I'd rather have something to read than nothing but I really, really wanted the March issue.
At the recommendation of the librarian, and I have to admit Wendell also suggested this first, I went to Barnes and Noble and, behold, they had TONS of the March O Magazine.
Now evoking Murphy's Law, my new subscription starting with the April issue arrived on Saturday. I suppose I could try to return the magazine, but that seems kinda weird. I'm sure they'll just think I'm cheap and I read the magazine then brought it back. In fact, it might not even be returnable. Anyhoo, I find myself with two brand new April 2008 issues of O Magazine and I only need one. So if you'd like to get a copy, save your $4.50 and just post a comment.
Posted by Jenna Wood at 8:44 PM

Visiting from the Ultimate Blog Party... I don't know why but when you mentioned returning the magazine it reminded me of George on Seinfeld when he tried returning a book he was forced to buy after taking it into the bathroom. Can I just blame lack of sleep if that comes across odd? LOL P.S. Love the comment under the Amish photo!

I love this magazine. :)

Livvy's Mom said...
This comment has been removed by the author.
4:04 PM

Hey there in Happy Valley- I grew up there, went to Orem High- Moved here to Vernal 5 years ago, love it but Miss my family, they are all still out there, mostly in Happy valley still. Thanks for stopping by and saying Hi, Happy partying and I hope you don't mind If I come back.

hey, I'd love to glance over the March issue. I am fascinated by money articles.

Do you ever watch Suze Orman's show?? Cuz I love her program, too!

This would be why I need to live in Utah down the street from you... :)

I graduated in '95. I knew some guys that we hung around with but I can't even remember their names now. I even went to Prom there my senior year, yep can't remember his name either. I ran on Cross Country and my sophmore year we beat Mt View but the rest of my time there you guys kicked our butts. But go ahead and ask me if I know anyone.... I will see if i can remember names and faces, if not I will pull out the ole year book. Bring it on baby

You know, I haven't ever read an Oprah magazine, maybe I'll start!

I am bouncing around the party and wanted to stop in to say hi! What a fun giveaway..count me in!!!

okay so I am lame and I didn't even say hey, when I left the last comment. So I deleted it and started over. Hey maybe I should do that more often in my life... you know delete and start over. But hey if we did that then we might be perfect and life wouldn't be so fun would it. Later Mater
Tam

I've never read an Oprah magazine but now you've got me curious! And you are so sweet to want to give your extra away to your blogging friends. I would have never thought of such a fun idea.

Nothing better than a magazine to read in a hot bath at night!!

Thanks for stopping by my blog earlier! I am not only a fellow Target snob, but I'm also an O fanatic. It is honestly the best magazine I've ever subscribed to! I loooove to read and there are always several pages devoted to new books...it's just a really heartwarming type of magazine...ENJOY your subscription!! I'll be stopping by again soon!

I'm up for an Oprah magazine.

I'm all about it!