I have a cousin who attended school with one of Donny Osmond's sons. As it turned out, the two were in the school play. On opening night (it may have been another night, but for drama's sake, let's say it was opening night) there was a lot of buzz among the cast that Chris' dad was back stage. 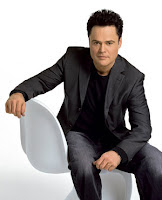 My cousin had heard a rumor about Donny that he wanted verified by the source himself. My cousin marched up to Donny and asked, "Are you Donny Osmond?"

"Are you sure?" my cousin wondered. Donny was sure.

Later when my aunt bumped into Donny, she congratulated him on his son's role in the play. She went on to explain which role her son had been playing. Instead of returning the congratulations, Donny got a funny look on his face and said, "Oh. That one."

It wasn't until they got home and my cousin confessed his misstep that my aunt realized why "Brother" Osmond had reacted that way.

On Monday I'll announce the winner of my Random Giveaway, so be sure to enter!
Posted by Jenna Wood at 11:14 PM

Hilarious. Famous people all around.

I'm surprised Donny acted so offended. Kids are so funny! Where did he ever hear that Donny was dead?

I have NO idea where he heard Donny was dead. Teenagers can be kooky sometimes.

I don't know how I missed this, but any post about Donny is a post I love.