I like to think of myself as "advanced" and "mature" but sometimes, I've just got to be egotistical and petty.


Yesterday, a friend of mine came by my house. We were visiting and I wanted her to see Annika's new skill: knowing her colors. "Watch this!" I said and I began pointing at things and Annika accurately said the color. She knows yellow, red, pink (a favorite), white, blue, green, purple (another favorite), black and brown.


What, I thought, who is Allison and what does she have to do with Annika knowing her colors?


"I wish," my friend went on, "that she had be the Nursery Leader when my son was in Nursery*."


You're kidding me, I thought, you are seriously going to give credit to a nursery worker who sees my child max 2 hours a week, but often as little as 6 hours a month due to illnesses picked up in nursery.


Can't I get some credit here!


Annika isn't even 2 yet and she knows her colors!!! Sure, I should deflect credit and say it's a God-given talent, but IF I'm deflecting credit, I'm certainly NOT deflecting it to the nursery worker.


So I got show-offy and said, "Ooo, here's something else Annika can do. Come here, Sweetie. Where's the letter O in this word?" 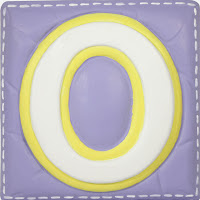 "Right there," Annika said pointing to the "O" on our basketball standard.


"Can you touch it?" I asked. I didn't want for there to be any mistake. Annika knows the letter O.


"Yea-ah," she said in her squeaky almost two-year-old voice. And touched the O. My friend gasped.


"Yea," I said nonchalantly, "she's learning the letter A, too, but she doesn't get it right all the time, but we're working on it."


There. You can't credit Allison with that one.


Don't forget to say, "Hey," in the comments of my Random Giveaway so you are entered to win.

(*Mormon 101: Children ages 18 months to 3-years-old attend Nursery for about 2 hours of church, allowing their parents to attend Sunday School and Priesthood or Relief Society meetings for that time. The children play with toys, sing songs, are taught simple lessons about Jesus and being nice, etc. as well as fed a snack.)
Posted by Jenna Wood at 8:29 AM

I've felt the same way many times. What is it about parenthood that makes us defensive and competitive sometimes? Of course she learned it at home. You guys are way better parents than whatshername is as a nursery leader. Sheesh. What was your friend thinking? ;)

I don't see why the friend just couldn't say...Great job Annika and leave it at that. What is the purpose of bringing up a nursery teacher? And after reading the mormom 101 (thank you for those by the way, i feel like i'm on the know)--it doesn't sound like the teacher goes over colors, numbers or whatever.

geez. i'll say it since the friend clearly missed the etiquette class on giving compliments.

Annika, you are doing a wonderful job. You have the best mommy and daddy in the world and work on spelling your name so you can blow all the kids out the water next week in class.

You have to be more consistant then a nursury leader to teach these skills. It is amazing that Annika knows these already. Well done!

No kidding. Parenting has nothing to do with it AT ALL.

I can't believe she gave credit to the nursery leader. Good grief.

Umm...I've been the nursery teacher before and I could have cared less if the kids were learning their colors or not in my class. Seriously it was just 2 hours of survival. So, because of that, if I saw a brilliant child, the nursery teacher is NOT the first person I would have thought to give credit to. Jenna, your friend is screwy! YOU deserve the credit! All of your children are so smart. You are a great mom. I need you to teach me how to have smart kids. Funny story though.

I think every mother goes through a little pettiness every once in a while. You were totally justified in that situation. I hate it when people try to take credit away from someone who really deserves it.

You need a hug today. We've all had those moments. Thanks for visiting my organizing blog. I had 4 children in 5 years, so I'm familiar with chaos. Every stage of life is different. Spending time with your children is far more important than neatly lined up stuff. Seems like you have your priorities in line.

Jenna, I loved your comment! I know exactly what you mean. But then who decides what "it all" means anyway when we're asked "How do you do it all?" :-D