Last May, Nathan's preschool teacher sent him home with a note that said, "Please send in the crappiest frame in your house and we'll do something fun." OK. That's not word for word, but you get the gist. So I hunted high and low for the worst frame in the house and I found it! But it had Anson's picture in it.
I immediately took the frame down, put his picture on the piano and sent Nate to school with the frame. (The frame eventually came back with Nathan's hand print and a picture of Nathan with a super sappy poem--that makes me cry--about what a big mess he makes and how someday he won't be around to make the mess.) By this time of the year, I knew I was pregnant, so I hauled off to Target and bought 5 new black frames.
And I never hung them.

Anson's picture was eventually moved off the piano and I had pictures of only 3 kids on the wall. And the only current picture was Annika's. After a while I could tell that this bothered Anson because he drew these pictures and put them where his frame used to be.
So last Sunday I did it...After 7 months without Anson's picture up (cringe) I got out the frames and everyone's current picture and redid the wall. It's kind of a weird wall and I had trouble taking pictures, but there's Anson right in the middle. See, I love him as much as my other children. 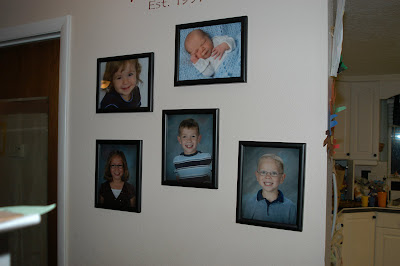 LOL! You're a great mother who just happens to be busy! Your wall turned out great.

Aw! LOL. My youngest has no baby pictures-they are burned to CD's but not in scrapbooks. When she asked what she looked like as a baby, I say, "uh, kinda like your brother..."

Funny! I love that he drew pictures of himself for you. I went a couple of years with no pictures on the wall. This last year I went out and bought new frames and went and had family pictures and individual pictures taken so that I could get back into decorating my walls with my family. All of the pictures and cool frames....are still in the closet and in a few months it will be time to take new pictures. AHHH! Where does the time go? What starts out as "I'll finish that later" turns into months and months later. This is a great story of how my whole life seems to be. Thanks for sharing. And your wall looks great!