I am a die-hard BYU football fan. Ever since my junior year of college when I over heard my dad explaining to a foreign exchange student the basics of football. (Why had he never explained it to me?) Once I knew that each team had 4 tries to move the ball 10 yards, football suddenly became interesting.

Now, of course, I'm much more savvy than that. (Last year a guy told me that I was quite knowledgeable for a lady. I took it as the compliment he intended.) And I LOVE BYU football. That's it, though. I'm a one team, one sport lady. :) 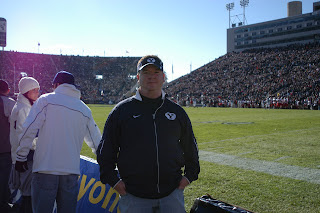 So Wendell was given, through work, front row tickets to this BYU-Utah game at the North goal line. (Plus Wendell got to go on the field during the 2nd quarter.) It was incredible to watch the game so close. I have to admit I was panicked when Utah went up 10-9 with only 1:34 remaining. I was even more panicked when we were 4th and 18 with over a minute left to play. Then, like magic, Max Hall threw up a huge pass, the kind the receivers were dropping all day. But Austin Collie was there. Ready. It seemed almost like he was running backward forever just waiting for Max to deliver the ball. But his catch would have been meaningless if we hadn't punched it in the end zone (thanks Unga!) for some serious points.

Whew! Once the Cougars were up 7 points, I knew we would win. The defense could hold the Utes off for 38 seconds.

Back to back Cougar victories against Utah!!!! I could just kiss Bronco Mendenhall. And curse all those silly sportscasters saying Utah would beat us. At home? When we're ranked? NEVER!

*That is actually a picture of me and all 9+ pounds of my baby. I'm pictured with my father-in-law. This also doubles as belly pics.
Posted by Jenna Wood at 5:08 PM

My husband was devastated that we didn't get the channel it was on today!!! I'm so excited that they won and we heard it was a great game.

I graduated from BYU, but it's so hard to get games up here in Idaho. I'm glad they won! Go cougars!

Okay Jenna and 9+ pound baby...You look beautiful!!!! and I'm so impressed that you are standing out in the cold for a BYU football game with less than a week to go until delivery. Second, Ken will die of jealously when he sees this post. Front row tickets to the BYU/Utah game? That is too cool. Ken's sister was here this weekend with her family and she taught Kate to say "I hate BYU!" just to tease Ken. It definately worked. Now we can't get her to stop saying it. I am with you though, I am a one game, one team fan. Go Cougars!

P.S. I love that you are posting pictures now. I really makes me miss you guys even more though. We really need to get together sometime soon. It's very fun to stay in contact through blogging. You both look great!